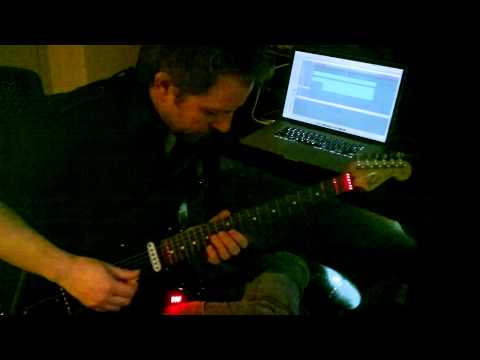 This video captures a demo from the 2011 Summer NAMM Show of a guitar from M3i Technologies that features Laser Pitch Detection (LPD) and Pressure Sensing Coating.

Here are the details, via marcelsmusic1:

For the first time in guitar history, the realm of digital music is directly available to guitar players, from quickly and authentically performing and recording complex MIDI arrangements to (wirelessly) triggering iPod/iPad audio apps to educational and transcription software to game consoles.

At NAMM I performed dozens of private presentations for the presidents of major music manufacturing companies.

Uli and Gregor of M3i have spent years developing the system and the software required.

Personally, after being sceptical to say the least, I am now almost convinced that 20 years from now a majority of new guitars will be equipped with the M3i or similar systems. The possibilities are LIMITLESS. Whoever thinks they don’t need a guitar equipped with with such a system in my opinion compares to someone who wants to buy a keyboard that has only one sound installed: Grand Piano. There’s finally is something that will take electric guitar to the next level. That doesn’t mean I don’t love my playing my Strat through a nice tube amp anymore, but after doing so for 25 years, I’m excited about the new possibilities opening up for me without having to learn the piano.

“What’s the big deal, MIDI guitars have been around since the 80’s? And no one’s ever really cared!”, you might say. True, but here’s the big, the HUGE deal: There’s practically NO LATENCY due to LPD! And a great response to the many subtleties of a guitarist’s playing techniques. Again, no additional hardware required. Did I mention the reasonable production costs?

The music technology geeks out there can find more information about the LPD system on M3i’s website at www.m3itechnologies.com.

Gregor has been a friend of mine since Kindergarten back in Germany. When he approached me last year and introduced me to the technology that he had been working on, it was a no-brainer for me to agree to represent M3i at this year’s NAMM show in Anaheim. Needless to say, I had a blast! 🙂